Holidays along the Adriatic Coast

The Adriatic Coast and Ortona a Mare

The Adriatic Sea /ˌeɪdriˈætɨk/ is a body of water separating the Italian Peninsula from the Balkan peninsula and the Apennine Mountains from the Dinaric Alps and adjacent ranges. The Adriatic is the northernmost arm of the Mediterranean Sea, extending from the Strait of Otranto (where it connects to the Ionian Sea) to the northwest and the Po Valley. The countries with coasts on the Adriatic are Italy, Croatia, Albania, Montenegro, Bosnia-Herzegovina, and Slovenia. The Adriatic contains over 1,300 islands, mostly located along its eastern, Croatian, coast. It is divided into three basins, the northern being the shallowest and the southern being the deepest, with a maximum depth of 1,233 metres (4,045 ft). The Otranto Sill, an underwater ridge, is located at the border between the Adriatic and Ionian Seas.

The prevailing currents flow counterclockwise from the Strait of Otranto, along the eastern coast and back to the strait along the western (Italian) coast. Tidal movements in the Adriatic are slight, although larger amplitudes are known to occur occasionally. The Adriatic's salinity is lower than the Mediterranean's because the Adriatic collects a third of the fresh water flowing into the Mediterranean, acting as a dilution basin. The surface water temperatures generally range from 24 °C (75 °F) in summer to 12 °C (54 °F) in winter, significantly moderating the Adriatic Basin's climate.

The Adriatic Sea sits on the Apulian or Adriatic Microplate, which separated from the African Plate in the Mesozoic era. The plate's movement contributed to the formation of the surrounding mountain chains and Apennine tectonic uplift after its collision with the Eurasian plate. In the Late Oligocene, the Apennine Peninsula first formed, separating the Adriatic Basin from the rest of the Mediterranean. All types of sediment are found in the Adriatic, with the bulk of the material transported by the Po and other rivers on the western coast. The western coast is alluvial or terraced, while the eastern coast is highly indented with pronounced karstification.

There are dozens of marine protected areas in the Adriatic, designed to protect the sea's karst habitats and biodiversity. The sea is abundant in flora and fauna—more than 7,000 species are identified as native to the Adriatic, many of them endemic, rare and threatened ones.

The Adriatic's shores are populated by more than 3.5 million people; the largest cities are Bari, Venice, Trieste and Split. The earliest settlements on the Adriatic shores were Etruscan, Illyrian, and Greek. By the 2nd century BC, the shores were under the Roman Republic's control. In the Middle Ages, the Adriatic shores and the sea itself were controlled, to a varying extent, by a series of states—most notably the Byzantine Empire, the Republic of Venice, the Habsburg Monarchy and the Ottoman Empire. The Napoleonic Wars resulted in the First French Empire gaining coastal control and the British effort to counter the French in the area, ultimately securing most of the eastern Adriatic shore and the Po Valley for Austria. Following Italian unification, the Kingdom of Italy started an eastward expansion that lasted until the 20th century.

Following World War I and the collapse of Austria-Hungary and the Ottoman Empire, the eastern coast's control passed to Yugoslavia and Albania. The former disintegrated in the 1990s, resulting in four new states on the Adriatic coast. Italy and Yugoslavia agreed on their maritime boundaries by 1975 and this boundary is recognised by Yugoslavia's successor states, but the maritime boundaries between Slovenian, Croatian, Bosnian–Herzegovinian and Montenegrin waters are disputed. Italy and Albania agreed on their maritime boundary in 1992.

Fisheries and tourism are significant sources of income all along the Adriatic coast. Adriatic Croatia's tourism industry has grown faster economically than the rest of the Adriatic Basin's. Maritime transport is also a significant branch of the area's economy—there are 19 seaports in the Adriatic that each handle more than a million tonnes of cargo per year. The largest Adriatic seaport by annual cargo turnover is the Port of Trieste, while the Port of Split is the largest Adriatic seaport by passengers served per year. 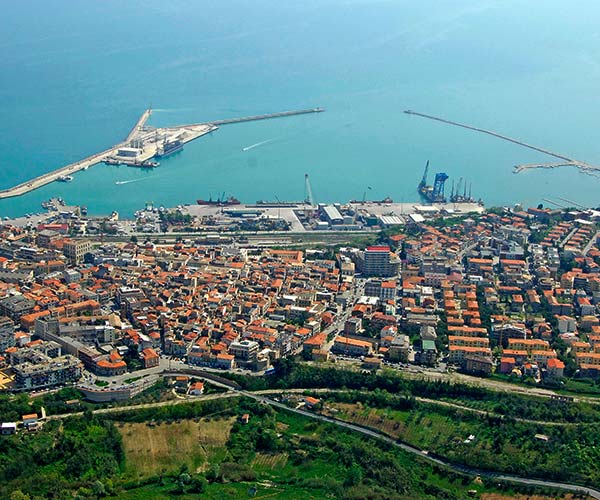 Ortona is a coastal town and municipality of the Province of Chieti in the Italian region of Abruzzo, with some 23,000 inhabitants. Ortona was the site of fierce fighting between the 1st Fallschirmjäger Division and the 1st Canadian Infantry Division during the Italian campaign in World War II. The ferocity of the battle led it to be known as the "Little Stalingrad" (See Battle of Ortona). The origins of Ortona are uncertain. Presumably, it was first inhabited by the Frentani, an Italic population. In 2005, during works near the Castle, a Bronze Age settlement was discovered, and the Roman town largely coincided with this first settlement.

Some sections of paved roads and urban walls, as well as some archaeological findings are the only remains of this period. Ortona remained a part of the Roman Empire (i.e., the Byzantine Empire) for several centuries, before it was annexed by the Kingdom of the Lombards. In 803 the Franks incorporated Ortona into the county of Chieti. From that date on, the town remained tied to Chieti and its territory.

In 1258 the relics of the Apostle Thomas were brought to Ortona by the sailor Leone Acciaiuoli. In the first half of the 15th century its walls were built, and during this period Ortona fought with the nearby town of Lanciano in a fierce war that ended in 1427. On June 30, 1447, ships from Venice destroyed the port of Ortona; consequently the King of Sicily at that time commissioned the construction of a Castle to dominate the renovated port. In 1582 the town was acquired by Margaret of Parma, daughter of Emperor Charles V and Duchess of Parma. In 1584 Margaret decided to build a great mansion (known as Palazzo Farnese), which was never completed due to her death.

After the establishment of the Kingdom of Italy in 1860, Ortona became one of the first sea resorts on the Adriatic sea. On 9 September 1943, the royal family of the House of Savoy left Nazi-occupied Italy from the port of Ortona. The defensive Gustav Line was established by the Germans at Ortona (extending towards Cassino on the opposite side of Italy). Though the town had little strategic value, the international press made so much of the struggle between the German paratroopers and the 2nd Canadian Infantry Brigade that neither side was willing to abandon it. This led to this battle being known as "Little Stalingrad."